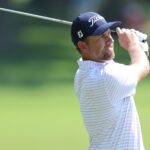 Simpson says he’s used cavity-back irons in the past, but the instances are few and far between.

Welcome to Wall-to-Wall Equipment, the Monday morning gear wrap-up in which GOLF equipment editor Jonathan Wall takes you through the latest trends, rumors and breaking news.

Webb Simpson is willing to admit when he’s wrong — and last week was one of those times. In preparation for the PGA Championship, the former U.S. Open champion started to contemplate the idea of shaking up arguably the best part of his game.

“I haven’t been hitting my irons great,” Simpson said. “Approach to the green is typically a strength for me; this year it’s been a weakness, and I’ve struggled out of the rough.”

Simpson wasn’t kidding when he called his iron game a “strength.” From 2015 to 2020, Simpson ranked inside the top 25 in SG: Approach before taking a noticeable dip this season to 84th entering the year’s second major championship.

Simpson is what you’d categorize as a blade lifer. He’s played “non-blade” irons for “a couple of short stints,” but nothing ever stuck. In the end, the familiarity and past success with blades eventually won out.

“I’m really picky with the iron look more than any other club in the bag,” Simpson told me in 2018.

No one is going to confuse Titleist’s T100 irons with 620 MB’s, but after being told numerous times that he might want to take the cavity-back irons for a spin, Simpson finally relented and found the cavity-back model to be noticeably better in a number of different areas beyond the obvious forgiveness benefit.

“I keep getting told that these irons I’m playing are better out of the rough, better with distance control, better with mis-hits, and so I guess I was being stubborn but finally listened and I really like them,” Simpson said. “They’re not a whole lot different than mine the way they look, but we’ve had good results with them so far.”

While Simpson found the T100 to be a superior performer out of the rough, he did notice a decrease in spin that resulted in him changing from a previous version of Titleist’s Pro V1 into the 2021 version to regain not only spin but control as well.

Simpson wound up finishing T20 for the week and put on a show during the third round with the new irons and ball — a five-under 65 in blustery conditions — while posting a season-best SG: Approach where he gained 4.541 shots on the field with his irons.

Players provided there was no one way to attack Southern Hills. For Tiger Woods, it was a more conservative approach with multiple long irons in the bag. In place of the 5-wood he typically carries, Woods added a TaylorMade P770 2-iron to go alongside a P770 3-iron. In Woods’ eyes, long irons were the prudent play off the tee on a course that he said during his pre-tournament press conference “still puts a premium on putting the ball in play.”

While Woods rarely deviates from the equipment script — he still plays traditional entirely through the bag most weeks — he’s embraced more forgiving options, such as P770, at the top of the set in recent years, including a P790 UDI at the 2019 Open Championship and older model UDI in previous years.

From a launch standpoint, the Mid version generates roughly 10-15 feet of additional peak height at the same weight (130 grams) as the original Dynamic Gold Tour Issue in Woods’ irons. But instead of stripping weight from the shaft to move the launch window higher, the midsection was reinforced and the taper rate changed in the tip section to achieve the stated goal.

Tony Finau’s Ping deal allows him to play several non-Ping clubs as part of the agreement. For at least one week, one of those non-Ping clubs was a Callaway Rogue ST Triple Diamond T 3-wood.

Finau has been playing the fairway wood since the Wells Fargo Championship. According to a recent writeup by Callaway‘s Johnny Wunder, the T fairway wood head has “similar DNA to the Epic Speed Triple Diamond T” with lower spin, extra camber in the sole for turf interaction and a neutral center of gravity.

Matthew Fitzpatrick has added distance to his game this season, but the sheer length of Southern Hills still required him to execute plenty of long irons to stay in contention. One of those long irons was an older model Ping S55 4-iron that saw plenty of action — until it apparently gave out.

“My 4-iron was worn out today,” Fitzpatrick told Sky Sports following the third round. “I hit so many shots. I actually changed it before the round. I changed the model. I hit so many great shots with it today.”

Fitzpatrick wound up replacing his S55 4-iron with a more forgiving i210 that’s currently played by a number of Ping staffers, including Viktor Hovland and Tyrrell Hatton.

Justin Thomas’ Vokey lob wedge was busy last week. With the Bermuda grass and bunkers posing a unique challenge, the two-time PGA Championship winner arrived with multiple grinds before opting for a K-Grind to handle the conditions.

“The T comes out when it’s pretty firm and the bunkers don’t have a lot of sand,” said Vokey Tour rep Aaron Dill. “This week was unique because we knew that the Bermuda grass would require a little more bounce and then the bunkers – they were just tough with very unique and coarse sand. I sat in a cart with him on Tuesday and he goes, ‘This sand, it’s really tricky, it’s very inconsistent and sometimes you don’t know what you’re going to get. Between the two models that I brought, the T and the K, the K is feeling the best and seems to be the most consistent out of this style of sand.’

“The K Grind is a wide flange sole, it’s a little wider than you’d see in a lot of other models, and it acts like a skid plate. It really is great for firmer conditions when you’re pitching and chipping off grass, because it sits really close to the ground. But where it really is strong is when you’re in the bunkers, because that added width of the sole allows you to open the face and increase some natural bounce. It’s a very forgiving style of sole and it just wants to pop the ball out of there easily and with spin.”

Most weeks, Johnson is content to navigate the course with a TaylorMade Stealth 3-wood (16.5 degrees), Stealth 7-wood (21 degrees) and Stealth Rescue at the top of the set, but after working with TaylorMade Tour reps on Wednesday, the group came to a general consensus that he needed a different “second shot” golf club to get himself in the best position to play offense.

With a 245-yard carry, the 9-wood wound up producing an almost identical distance to the 3-iron, which made for a seamless transition.

While the 9-wood is a club you almost rarely see on Tour — amateurs with slower swing speeds tend to gravitate toward the club in an attempt to induce a higher launch — it has surfaced in surprising numbers at recent major championships.

During the 2020 PGA Championship, Bubba Watson, Louis Oosthuizen and Matthew Fitzpatrick all added 9-woods as they attempted to find suitable options to extricate their ball from the rough with a towering launch and ample spin.

Quick-hitters: Patrick Reed was seen testing a 9.5-degree Grindworks prototype driver. Reed already has Grindworks irons and wedges in the bag, but he’s under contract with PXG for the driver and hat. … Dustin Johnson put a TaylorMade Spider GT Splitback mallet in the bag for the first round. He wound up going back to his old Spider Itsy Bitsy on Friday.

Want to overhaul your bag for 2022? Find a fitting location near you at GOLF’s affiliate company True Spec Golf. For more on the latest gear news and information, check out our latest Fully Equipped podcast below.

Jonathan Wall is GOLF Magazine and GOLF.com’s Managing Editor for Equipment. Prior to joining the staff at the end of 2018, he spent 6 years covering equipment for the PGA Tour.