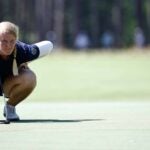 Ingrid Lindblad was starstruck when she found out she was paired with Annika Sorenstam, but her play was fearless.

SOUTHERN PINES, N.C. — When Ingrid Lindblad saw her grouping for the first two rounds of the U.S. Women’s Open, she was starstruck. She was paired with two major champions: So Yeon Ryu and fellow Swede Annika Sorenstam.

“When I saw that I’m playing with [Annika] I was like, in shock,” Lindblad said. “I was like, ‘This cannot be true.’”

The thrills didn’t stop there.

When Lindblad reported to the 9th tee for her 8:50 a.m. tee time, Sorenstam passed her scorecard to the young amateur.

“I’m like, ‘I have Annika’s scorecard in my hands,’” Lindblad said.

But if there was any power dynamic at play when the 8:50 grouping teed off, it was put to rest on the course. Lindblad navigated Pine Needles masterfully during her opening round, making seven birdies en route to six-under 65, a score that, as of mid-afternoon Thursday, gave her a two-stroke lead at the Women’s Open.

Her scorecard — blemish-free except for a bogey at the 10th — doesn’t tell the entire story, though. It wasn’t just that Lindblad, a rising senior at LSU, took the early lead at the biggest event in women’s golf. It was how she did so that impressed.

While Sorenstam and Ryu plodded around the Donald Ross design with finesse as their guiding light, Lindblad stuck to her game: power. She averaged nearly 270 yards per drive off the tee in her opening round, near the top of the field, and those extra yards put wedges and short irons in her hands far more than her competitors.

Her mentality is an asset, too. Lindblad is not afraid to go low (her career low at LSU is a scorching 64), and she brought that courage with her to this major.

“She’s a fearless player,” said Sorenstam, who shot a 74 in Round 1. “I think she’s confident in her own game. I know she doesn’t shy away from the limelight that maybe I did as a young girl.”

The grand stage is not foreign to Lindblad, either. She’s a two-time All American at LSU and has won SEC Player of the Year twice as well. That’s not to mention her pair of top-three finishes at the Augusta National Women’s Amateur.

An amateur winning this championship is not without precedent, but it has been 55 years since Catherine Lacoste accomplished the feat. In recent years, amateurs have flashed and faded, and 72 holes of stellar has been too much to ask.

But that doesn’t mean Lindblad is doubting her chances.

Zephyr Melton is an assistant editor for GOLF.com where he spends his days blogging, producing and editing. Prior to joining the team at GOLF.com, he attended the University of Texas followed by stops with Team USA, the Green Bay Packers and the PGA Tour. He assists on all things instruction and covers amateur and women’s golf.